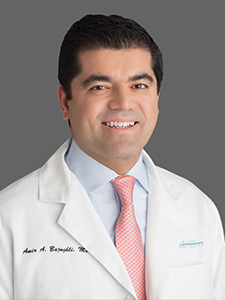 Amir Bajoghli M.D. and his medical assistant Kayla Tran B.A. recently published their latest scientific findings in the esteemed Journal of Oncology Practice, the official publication of the American Society of Clinical Oncology. The finding involves a patient who presented with a sudden onset of upper and lower lip swelling known medically as angioedema. While investigating his condition Dr. Bajoghli and his team noted that the patient had a decreased level of a blood protein known as C1-inhibitor. This was a clue that his condition was acquired. The next step was to determine what was driving his blood protein C1 inhibitor to be decreased. Upon further research he was noted to have a high level of platelets (cells responsible for blood clotting). This led to a test known as bone marrow biopsy, which revealed his underlying condition of essential thrombocytosis (abnormally increased levels of platelets). The patient was treated with a medication known as hydroxyurea, which improved his underlying abnormal condition (essential thrombocytosis) and his lip swelling symptoms.

Dr. Bajoghli is honored to publish the case with his father, Dr. Mehdi Bajoghli, a practicing allergist and immunologist in Northern Virginia who initially examined this patient.